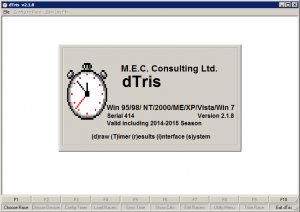 dTris is the software used during a race to manage racers coming down the hill.

Here is a series of videos that Michael Walker have done for setup and timing of a race.

DTRIS 2.19 Part 2 – Timers and Displays from Michael Walker on Vimeo.

1. Adds Automated update checking. This checks for updates on dTris start up. Clicking Yes will close dTris and download the latest installer. Clicking No will allow for continued operation on the current version.